From Rust to TypeScript: Lifetime Analysis for React Component Architecture

I'm a bit cheating on this one's title since this is less about TypeScript and more but about React, better yet, React app empowered by TypeScript. Anyhow, let's get to the point.

Object lifetime has always existed in programming, though only recently it is tightly coupled as a programming constraint by non-GC programming language, in a form of C++'s RAII and the notoriously complex, Rust's ownership and lifetime analysis. it turns out, a similar analysis method is actually useful to architect React components, more precisely to determine which state goes where.

What are object, lifetime, and ownership?

Object, in my article, refers to any value in memory, so since we are going to talk in TS and JS world, anything is object, including, function, JS object, Symbols, number, BigInt, Map, etc.

Lifetime, or to be more precise, an object's lifetime is the period between the object's creation in memory and its destruction.

Ownership is a term I borrow from the Rust programming language to refer to the referability of a target object from a source object. That's complex! What I mean is, if you can get access to object B through object A, then A owns B. If object A has property B, A owns B. If function A has access to variable B, function A owns variable B. Unlike in Rust, JS does not have a mechanism to keep track of the original owner, so I'm keeping it simple.

In my workplace, I'm a part of a team that has been, for quite long, working on a complex project built mostly on TS with some C++ and Rust. It has equal React and non-React parts and is highly concurrent.

As we were going on the journey, I began to see two kinds of programmers in my team. For now, I'll refer them to the system-minded and the script-minded. The script-minded suits more on works closely related to client-side-ish, better suited to work on problems of implementations. The system-minded is more architecturally sensitive and suits more to work on specifications.

The system-minded devs are subconsciously aware of this ownership and lifetime design, but they may not have the exact glossary around them. They often write a good architectural review, which sometimes comes late because it is happening after implementation, not before, a case of imperfect change management. Anyhow, when challenged on why the big architectural changes must happen before the code is being merged into a long-running git branch, it is hard for the system-minded people to reach intelligible sentences that can convince the script-minded people.

This article, I wish, can serve as an easy heuristic that can explain the intelligence of lifetime analysis in intelligible sentences as well as help people in architecting a React app. Also, this article points out the cost from misarchitecture, however minuscule. Ultimately, it should relieve everybody from the potential frustration related to object ownership design in TS and React apps.

How does lifetime plays the important role?

It is pretty much impossible and useless to see the exact timestamps of an object's lifetime. However, comparing the lifetime of two related objects is extremely useful. These questions can be used to properly do lifetime analysis:

Let's make this less abstract by examining an example. I am going to use a very simple case, which is a page and a modal in a video hosting site. There is no OS process or threading involved. All concurrent operations are treated as the same class here.

See the picture below as the requirement's illustration. 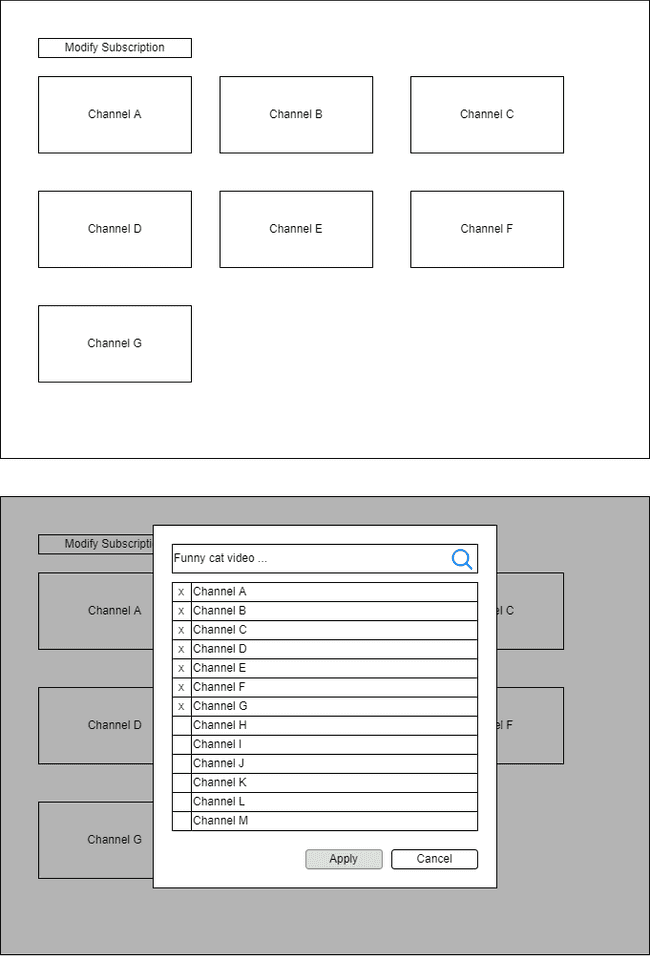 The ultimate question of architecture in this problem scope is, "where should I put the plain objects"?

In the least optimal architecture all plain objects are put owned by Channel Page. This introduces several issues:

How do we fix these?

How to rearrange the ownership of these objects to get rid of these negative impacts? Let's start a lifetime analysis. Let's ignore all functions and focus on the objects. We are going to need a table of the lifetime relationship between owner and ownees.

"Where did the lifetime relationship column came from?" you might ask. Here's an explanation.

Now that we have the table, let’s do some processing on the table:

We can derive some info from this table:

For the sake of simplicity, for the duplicated ownership relationship, let’s choose the first one, immutable shared ownership.

What we have is this architecture:

What happens to the negative impacts from the previous non-optimal architecture?

That example above is only an extremely simplified version if Rust's lifetime analysis applied to a very simple problem. It did not account for the existence of concurrent operations, concurrent function calls, only React components and plain objects. You can practically use this heuristic to derive other heuristics that apply to other types of objects, the serializable vs the non-serializable, promises, always unique, etc.

I'm also encouraging all of you to check on Rust's lifetime analysis, complete with its ownership and borrow analysis, just because those are very insightful toward software architecture in general.

Keep exploring, Rust, TS, other programming languages, other non-programming stuff, everything. It is still early.