Beyond Black Hole: A Shower Thought

Disclaimer: I am a software engineer, not a physicist. This article might look serious, but it's still a piece of sci-fi.

To have the ability to instantly traverse an infinitely far distance is an intriguing idea. From the wormhole in Nolan's Interstellar to EVE Online jump drive, that idea is that mind-blowing it almost never fails to entertain to see it in mainstream media. One type of proposed theoretical wormhole is Einstein-Rosen bridges. It says, simplified, at the opposite of black hole, there must be a white hole. A white hole is a hypothetical region of spacetime and singularity that spews out particles and cannot be entered from the outside.

I watched this The Action Lab video last night. I've been watching some of his videos. His videos about the quantum mechanics are fun. But this one specific video reminds me about one itch I want to scratch badly. Many literatures tell what beyond a black hole is a white hole. I'm not comfortable with the concept of white hole beyond a black hole. I feel it missed something.

What Beyond Blackhole Is Just Like Where You Are

Sometimes it is a classical Lovecraftian claustrophobic story, "if you are sucked inside black hole, you cannot get out."

Sometimes it is a medieval torture, "you leg will be stretched into the black hole faster than your head."

In Christopher Nolan's Interstellar, hostage situation, "stay close the black hole too long and you don't get too see your kids."

Now, maybe the reason why Christopher Nolan's Interstellar, advised by Kip Thorne, chose a super massive black hole instead of golf-ball-sized one is that theoretically if a black hole size is big enough, you can go inside without experiencing any significant spaghettification that may shred you into pieces. I maybe watch too much Interstellar but I think going inside (or more accurately passing through) a black hole that big is just like driving through a space-time downward slope.

So I went like "swooob", then I was on the other side. That was surprisingly normal!

I drew a line connecting a singularity and a random point outside of an event-horizon. That line is what an entity will pass if it falls into a black hole without revolving around the blackhole. 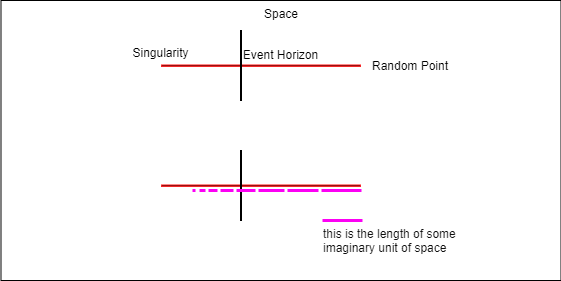 Let's work on just the line. Picture above is how it looks one-dimensionified. From the perspective of someone outside and far from the black hole, particle sucked into the black hole gets smaller. More accurately, the space occupied by that particle gets smaller. Like space, time also gets distorted. The "effort" for a particle to get from one timeframe to the next timeframe is smaller the closer it is to singularity. In other world you get old slower near a black hole. 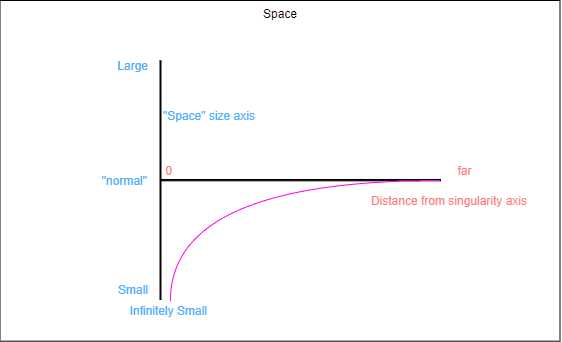 As a chart it will probably look like that.

I imagine that going passing into a black hole would be like walking into a downward slope. The height of the ground in this analogy is the aforementioned "effort" to fill up a space and pass a time. Being lower means needing less effort to fill up space and pass a time, hence being smaller and getting old slower. For the slope angle, the smaller the black hole, the steeper the slope is, and vice versa. 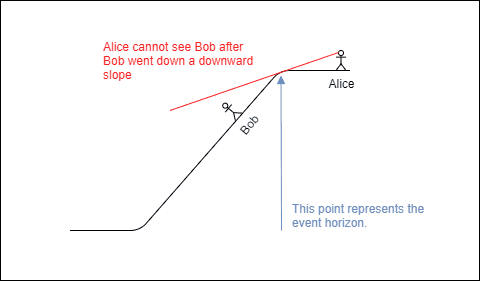 Now, what will you be experiencing once you goes down the downward slope? Until the end of the slope, there will be a constant condition where the space and time in front of you requires less "effort" than where you are and the space and time behind you requires more "effort" than where you are. That condition pushes you forward. That will be happening until you're at the end of the slope. Therefore the steeper the slope, the smaller the blackhole, the more risk you fall (shred apart because of the "effort" difference).

With that said, after the end of the slope, what you will see?

So here's what I thought. Looking back, what is before the downward slope? near infinitely faster time and bigger space. So what you see should not be a white hole with a singularity spot spewing particles out of it. What got inside the black hole before and after you should be there at the same time because before the black hole, time runs near infinitely faster than where you are. You got there at the same time. At the bottom of the slope, you can look up and see everything that goes into the black hole both from the future and the past. In 3D world you just sort of pops into existence.

Because the "effort" before the black hole to fill up a space is near infinitely bigger than where you are, two particles a peanut apart before the black hole is now near infinitely apart after. As the opposite of blackhole, where it is a convex 3D space with singularity at the center, is "beyond the black hole" is a concave 3D space with anti-singularity at whatever the "opposite of center" is. So instead of white hole, is it an instance of observable universe at the opposite end of a black hole? Is matter-antimatter asymmetry caused by something thrown into a black hole from another universe? Is big bang was just a result of black hole forming?

Did You Come with Formulas?

Unfortunately I didn't. I came up with all these while I was in the bathroom. Somehow time passes slower in my bathroom that I got to think about it. Everywhere else I couldn't even think fast on what to eat for dinner. Like the disclaimer says, this is a piece of science fiction, but hopefully one that mimics the facts. It might be just a symptom of too many sci-fi (especially Interstellar, damn I love that movie). Either way, I'm not fluent in the language of physics as I'm not a physician.

Now, this is the end of the article. I hope you enjoyed it. fin